Cyprus is an island in the south-eastern Mediterranean, geographically part of Asia, but politically and culturally part of Europe. The island is much closer to Turkey, Syria and Israel than to the rest of Europe.
Cyprus is smaller than Sicily and has a population of about 1,000,000 inhabitants. Two-thirds of these are Greek-speaking (Greek Cypriots), one third are Turkish-speaking (Turkish Cypriots).

From 1236 to 1571, the island belonged to the Republic of Genoa and then to the Republic of Venice. From 1571 to 1868 Cyprus was part of the Ottoman Empire. Throughout this time, Greek-speaking and Turkish-speaking residents lived peacefully together.

From 1868 to 1960, Cyprus was a British colony. Immediately after the takeover of Cyprus by Great Britain, a movement (enosis) emerged, which called for the incorporation of Cyprus into Greece and contributed significantly to the emergence of a conflict between the Turkish-speaking and Greek-speaking inhabitants.

The movement also had many followers, because the population lived in very poor conditions. Britain did not invest on the island and pursued a policy of „racial separation“ between the Greek Cypriots and the Turkish Cypriots, e.g. with separate schools, administrations and institutions. Thus the hostilities between the two groups grew, which served to the geopolitical interests of Great Britain.

After the Second World War the call for a union with Greece and the tensions between the Cypriot and the Cypriot Turks strengthened. The latter were skeptical about the union with Greece and looked rather towards Turkey, which had become a republic in 1923. The conflict gained an international dimension. The involved parties Great Britain, Turkey and Greece agreed to grant Cyprus independence in 1960.

After the independence, tensions between the two ethnic groups grew again. There were terrorist attacks, police massacres,violence,  rapes, and the expulsion of Turkish Cypriots. The situation escalated in 1974, when a coup d’état was staged by Greek Cypriot nationalists who wanted the union with Greece. Thereupon, Turkey intervened with an invasion and occupied about 37% of the island.

The Turkish invasion of 1974 was accompanied by massacres on both sides and demanded many death victims, as well as the displacement of approximately 200,000 inhabitants. Greek Cypriots fled from the north of the island, the abandoned places were occupied by Turkish Cypriots, who had fled from the south.

Since then, the island has been divided, with the Turkish-speaking North being not internationally recognized. On this part of the island Turkey is stationing about 30,000 soldiers. However, Turkey has made a significant contribution to the improvement of agriculture by laying a water pipeline from the continent. Cyprus suffers from water scarcity and this fresh water supply allows irrigation of the numerous orange plantations typical of the north.

Discussions on reunification, which have so far always failed, only resumed at the end of 2016. A reunification would have immense advantages for the economy of both parts: Northern Cyprus would gain access to the EU’s internal market, while a reconciliation of South Cyprus with Turkey would not only promote trade, but would also remove the obstacles to the exploitation of newly discovered natural gas fields (see below).

The talks fail not only due to the property claims of the displaced Greek Cypriots or the unwillingness of Turkey to withdraw the occupation troops. The attempts at reunification mainly fail because the north and south of Cyprus have developed economically very differently.

The Turkish Republic of Northern Cyprus is mainly dependent on agriculture and trade with Turkey. It is internationally isolated and cannot participate in world trade.
The southern Republic of Cyprus, on the other hand, has developed into an important financial center, which mainly benefits  from EU membership. Prior to joining the EU in 2004, South Cyprus was a regular tax haven, and there are still countless law firms and tax offices that focus on tax optimization and tax evasion.

From the 1980s, a lot of capital fled from Russia to Cyprus, creating a bloated banking system. Because of the massive purchase of Greek government bonds that lost value as a result of the financial crisis, the country fell to the brink of bankruptcy in 2013, which was averted thanks to a 10 billion aid granted by the EU,  the ECB and the IMF. The condition for the loan was that for the first time the creditors of the banks were compelled to participate in the rescue of the institutes. It was agreed that investors with deposits of more than € 100,000 would have to waive part of their claims – at the Laiki Bank up to 50%, at the Bank of Cyprus up to 30%.

One of the conditions for the 2013 rescue aid was the stabilization of the financial system in Cyprus. But now the collapse is threatening again. At all, the financial sector is much too big for the small economy. The banks suffer from non performing loans. The disproportionately high number of financial service providers based in Cyprus (currently 244) is also becoming a destabilizing factor.

Many of these financial service providers are based in Cyprus because they have access to the EU’s internal market, while at the same time being subject to lax financial supervision. Because of the lack of supervision and the lack of disclosure requirements, many of these investment firms tend to „moral hazard“ and have damaged thousands of small investors.

According to European rules, Cyprus has an investor compensation scheme named ICF (Investor Compensation Fund for Customers of Cypriot Investment Firms). This should protect investors up to 20000, – €. However, related to the number of investment firms, it is likely that the ICF is underfunded and unable to provide effective investor protection. If a larger financial services provider were to file for bankruptcy, this could lead to the collapse of the entire Cypriot financial system.

A manufacturing industry is scarce in Cyprus. In recent years significant quantities of offshore natural gas have been discovered south of the island. Oil companies from the EU, South Korea and the USA are applying for the exploration and drilling concessions These natural gas reserves may be an important reason for Cyprus membership in the EU. Here is a map of the exploration licenses currently issued (Source: Ministry of Energy, Commerce and Tourism of the Republic of Cyprus): 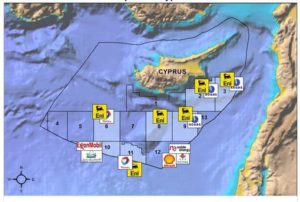 Is the oil, stupid ?

Against this backdrop, the reopening of the negotiations on reunification is reasonable: Cyprus could become a major energy supplier to Turkey, which is currently dependent on Russia, and could build a gas pipeline through Turkish waters.

Politically, South Cyprus is a presidential republic; the head of state and of the government is elected by a process of universal suffrage for a five-year term. The currently ruling party is the conservative DISY. Next elections are in 2018.

Corruption and cronyism are commonplace in Cyprus. A list of the scandals discovered in 2015 can be found in the Annual Report of Cyprus Audit Office. The Auditor General is one of the few honest officers fighting against corruption and abuse of power in Cyprus 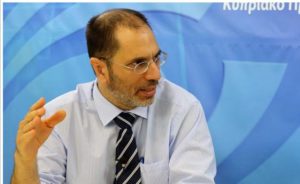 Cyprus benefits from EU membership, but does not take it so closely with the implementation of EU law. At present, numerous infringement proceedings against the Republic of Cyprus are pending, for example due to the non-transposition of the statutory audit’s directive and of the financial statements‘ directive.

While the majority of the population suffers from poverty and unemployment, at the top of the society is a small, English-speaking elite, which is strongly characterized by family ties. The members of this mighty upper class are normally employed as trustees, or as partners in the numerous law firms and tax offices that contribute significantly to the national economy of Cyprus.

These law firms are often doing their business on the brink of legality. This is exemplified in a case where recently a deputy general attorney was sentenced to jail for corruption and abuse of power.

Cyprus reunification would cause a redistribution of offices and benefices that the privileged upper class of Southern Cyprus doesn’t really welcome. On the other hand, the EU would support a reunification with renewed subsidies, which the leaders are keen on.

The political elite can also select the companies who are going to get the concessions for exploration and later for the exploitation of the natural gas reserves. It may grant contracts for the construction of the gas pipeline. In the newly subscribed contracts, Italian ENI and French Total were able to secure a large portion of the cake.

Is this the reason for the unbelievable inactivity of EU authorities on the numerous violations of EU Law by Cyprus, which have hurt thousands of small investors in all Europe?

Any cookies that may not be particularly necessary for the website to function and is used specifically to collect user personal data via analytics, ads, other embedded contents are termed as non-necessary cookies. It is mandatory to procure user consent prior to running these cookies on your website.